Hall of Fame Alum Reflects on Racial Injustice, Hunger, and Paying it Forward 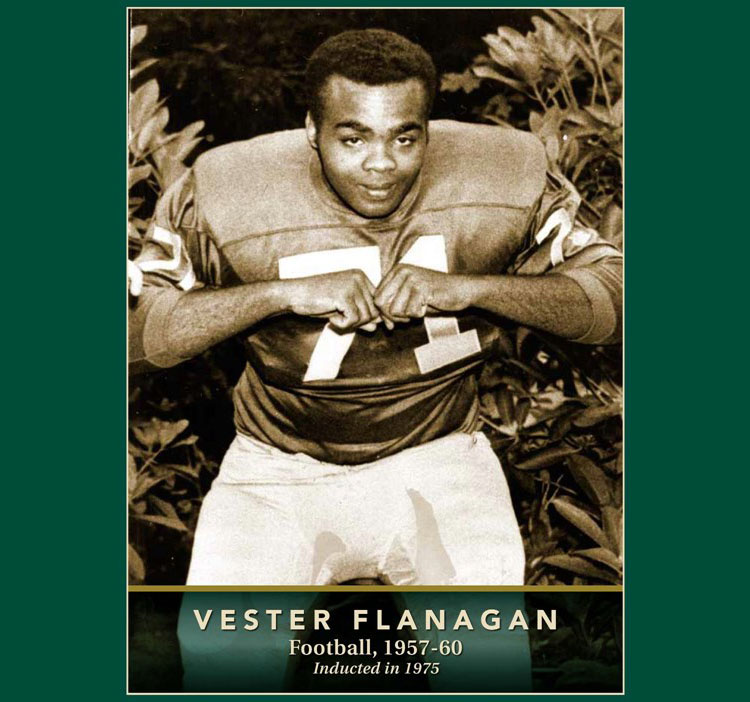 February 1, 2017—Vester Flanagan’s (’61, Education) life is a testament to the power and possibility of higher education. The HSU Athletic hall of famer has been a pro football player, scholar, teacher, administrator, and international education consultant. Never forgetting the important role of HSU in his own life, Vester supports the football and track teams, the Black Student Union, and the Food For Thought program.

Vester traversed a landscape of obstacles on his path to success, including the challenges of being one of the few black students on campus in 1957. Like many other students, he contended with hunger, loneliness, and the academic rigors of college. He knows the struggles students face in pursuit of a more promising future.

“As a student I went to bed hungry quite a few times,” says Vester, reflecting on his support for HSU’s Food For Thought program, which provides food to students who don’t have enough money to eat. “There were times I didn’t have money to eat for days. If you’re hungry you can’t sleep. And if you can’t sleep you can’t study.

“The owner of an Italian deli in Arcata would give me a loaf of bread or salami. You don’t forget things like that. That’s why I give to Food For Thought. Maybe a student goes to the foodbank one weekend, maybe that’s the weekend they don’t give up. It’s hard to stay in school when you’re hungry.”

After college, Vester was drafted by the Green Bay Packers, but ultimately chose a career in education. He taught three years in an inner-city school in San Francisco before completing a Master's in Special Education. He spent many years working for City College of San Francisco, eventually retiring as chief administrative officer and director of operations.

During his career Vester also served as an educational consultant, working for think tanks and traveling to places such Brazil, Argentina, and Jerusalem to help design education programs in local school systems. Though he’s enjoyed many unique opportunities throughout his career, he recalls the obstacles of being a black student during the years prior to the civil rights movement.

For instance, when the Lumberjack football team traveled to St. Petersburg, Florida, to play for the national championship in 1960, Vester and the other black players were greeted with a sign at the airport that read “whites to the left, blacks to the right.” During that trip, black players from HSU weren’t allowed to stay in the same hotel with their white teammates. The mistreatment of black HSU athletes in St. Petersburg attracted national attention after drawing protests from several faculty members, awakening the campus--and state--to the realities of segregation in the South.

In another incident, Vester told this story of what happened during a trip to Reno for a track meet in 1960. “We arrived in Reno and visited a casino to see what it was like. I was the only black person on the track team at the time. I was playing a slot machine when a casino employee confronted me and told me I couldn’t be there. One of my teammates, a guy named Roger, came to my defense, saying ‘if he goes, we all go.’ And with that, the entire track team, about 30 guys, walked out. The team had my back.”

Vester says he supports HSU track and football and the Black Student Union because those are the people who looked out for him as a student. Now he’s looking out for the next generation.

“HSU was pivotal, helping me get to where I am today. They weren’t hiring many black people for jobs in the Bay Area when I was a young man, but I could not be denied with the education I received at HSU.”

“HSU professors expected a complete understanding of subject matter. HSU taught me how to think, speak, and plan. I didn’t just learn what happened in the past. I learned to look toward the future.”

Vester continues to look to the future by supporting students at Humboldt State. If you’d like to join him in creating access and opportunity for HSU students, or if you want to learn about other ways to support HSU students, visit loyalty.humboldt.edu, email the Office of Philanthropy at giving@humboldt.edu or call 707-826-5200.