Talk with Lynn Jones ('00, Art), owner of Just My Type Letterpress about how she started her business and has made it a success.

Here's a little bit more about Lynn: I'm a jeans-and-T-shirt kind of girl. I grew up in the San Francisco suburbs. My rather innocent upbringing allowed plenty of time for sports and artistic endeavors. I have always enjoyed making things with my hands.

I cut my first linoleum block in college and liked it, but it wasn’t until my internship with David Lance Goines in 1999 that I discovered what it could mean to me. The “handcraftedness” and the texture within the solid color of linoleum block prints spoke to me. He put me to work cutting linoleum blocks and introduced me to letterpress printing and so many other fabulous things and people. Using Mr. Goines’ press, I started printing things for friends and family. After a few projects, I knew I was hooked. I began acquiring printing equipment in 2003 and set up my own studio in Arcata, CA in early 2005.

I also got married in 2005. In 2007 I needed to take a bit of a break from the biz. I had kids in 2008 and 2011. In late 2013, I decided to bring Just My Type Letterpress back to life. I worked out of my garage until December 2015 when I started printing the packaging for Dick Taylor Craft Chocolate. In Fall 2016, one thing led to another and my friend and former co-worker, Siobhan Ayres, and I made one of our dreams real. It took about 15 years, but I finally got my shop with a working press in the window.

After 3-1/2 years at 501 Third Street, I moved around the corner to the front of the building! (235 F Street) The new shop is bigger, better and the presses are REALLY REALLY in the window! 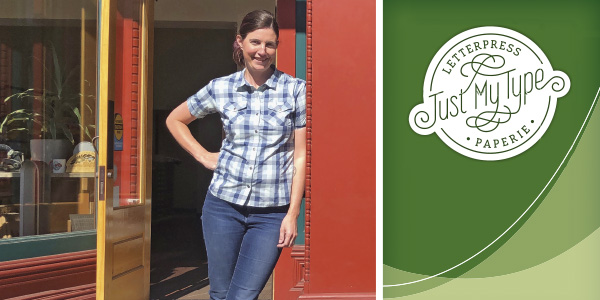