The Race to Save a Critically Endangered Bird 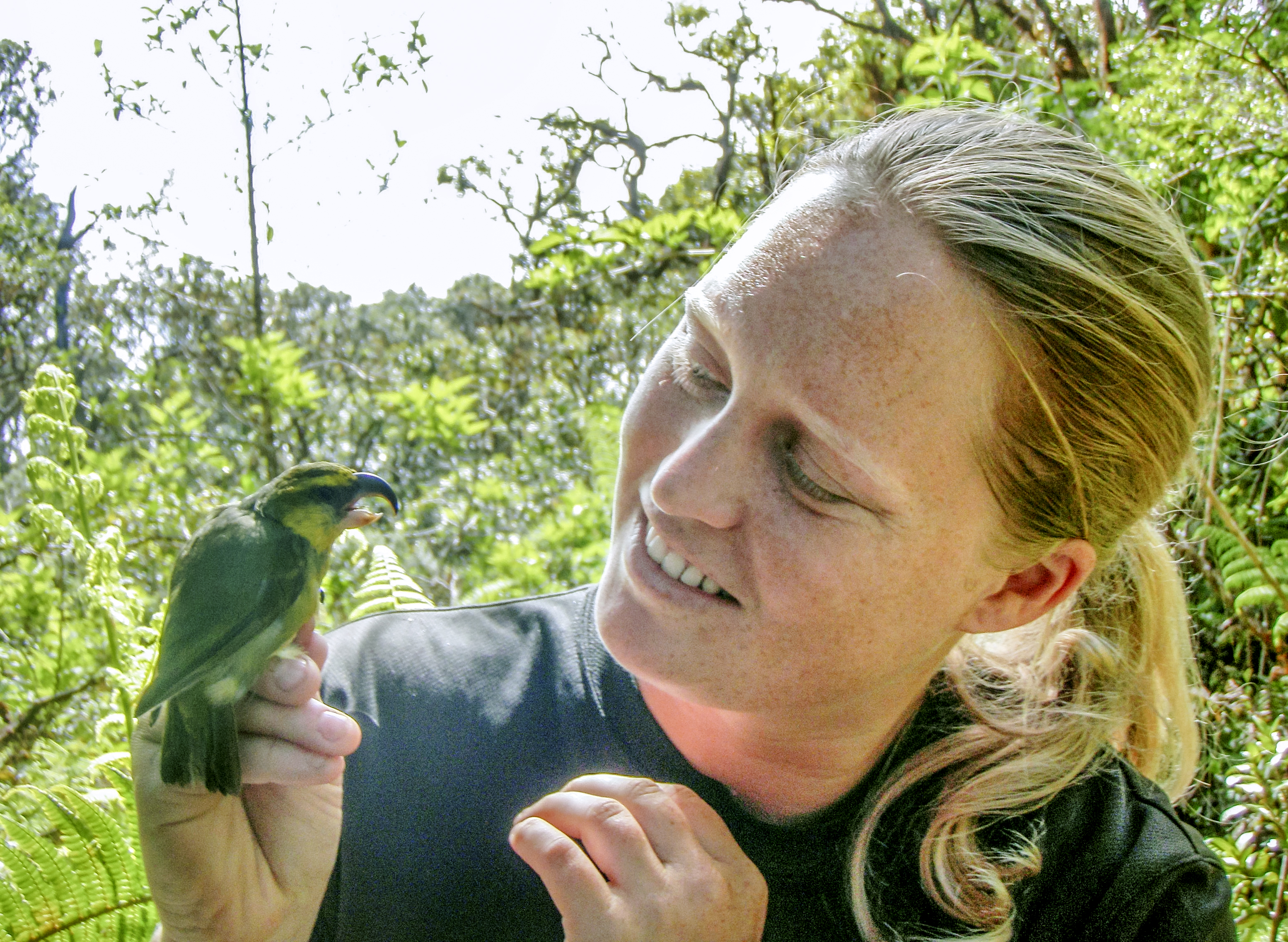 Growing up in rural Northern California, Hanna Mounce (‘03, Wildlife) was always surrounded by animals from her county fair chickens to the injured wild birds she often found and rehabilitated. Drawn to Humboldt State for its small-town setting and the opportunity to play college volleyball, Mounce took a wildlife seminar during her freshman year and realized the potential of a career in wildlife conservation--working directly with animals in the field.

“By studying wildlife at HSU, I was introduced to techniques like mist netting and banding,” remembers Mounce. “There was so much opportunity to observe and learn from the diverse taxa in the local environment.”

After graduation, Mounce tracked Swainson thrushes in the nearby dunes, followed by a banding position in Costa Rica for a project sponsored by HSU’s Redwood Sciences Lab. In 2006, she hopped a plane bound for Hawaii to work as a field tech for the Maui Forest Bird Recovery Project (MFBRP).

Today, Mounce is leading a team of scientists to save the kiwikiu, or Maui parrotbill, one of the most critically endangered species in the world.

“There are less than 150 individuals left on the planet,” explains Mounce, the MFBRP Project Coordinator since 2010.

Small, brightly-colored green and yellow birds, the kiwikiu are a species of Hawaiian honeycreeper and native to the Hawaiian islands. Over time, their populations have been decimated due to habitat loss and degradation from invasive goats, pigs, rats, mosquito-borne diseases, and humans.

“We’ve been rebuilding a forest from scratch for native birds but climate change has basically caught up with us,” explains Mounce.

Last fall, Mounce’s team translocated 13 kiwikiu to the leeward slopes of the Haleakala Volcano on Maui. After a decade of restoration efforts, the release was highly anticipated. After only nine days, Mounce and her team began finding deceased kiwikiu.

“It was pretty devastating,” says Mounce. “At first, we didn’t know what to think but it became evident that it was avian malaria.” The mosquito line, previously hovering around 4,700 feet, was now higher than anyone had anticipated, likely due to warming temperatures.

“The disease landscape had literally moved under our feet while we were preparing to move the birds,” explains Mounce. Now, she and her team are faced with new questions about where the dwindling number of kiwikiu can survive.

“Everyone is really worried about what the higher disease elevations mean for native bird species across the state,” says Mounce.

To learn more, visit www.mauiforestbirds.org. To help save the kiwikiu, send a tax-deductible donation to Na Koa Manu Conversation.

Hear the kiwikiu sing in the wild.