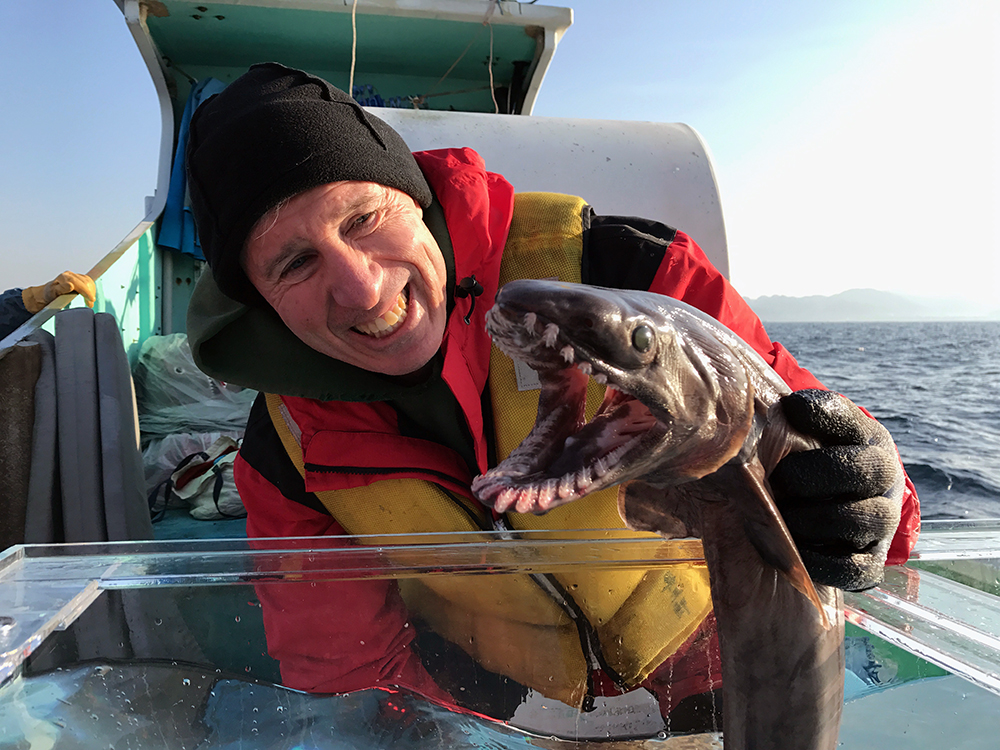 A cup of coffee with a professor from the Telonicher Marine Lab changed everything for Dave Ebert (’81, Zoology). The soon-to-be graduate from Cal Poly Humboldt knew what he wanted to do since he was in grade school: travel the world and study sharks.

“I got really inspired when I was five years old, my parents gave me a book on sharks and I thought they were just the coolest thing,” says Ebert. “My parents thought I would grow out of it.”

John DeMartini, professor emeritus of Zoology, who had mentored Ebert through his undergraduate degree, took him out to coffee and suggested gently that if traveling and professionally studying sharks was what he wanted to do he should pursue a master’s degree. And although Ebert was bursting to leave the academic world and pursue his childhood dreams, he took DeMartini’s words to heart. He pursued a master’s degree in Marine Biology at Moss Landing Marine Laboratories on the Monterey Bay and went on to earn a Ph.D. from Rhodes University.

Today Ebert is known as the “Lost Shark Guy” for his work discovering and documenting little known or unknown sharks such as the enigmatic ninja lanternshark and the giant megamouth shark. He has visited six continents and more than 35 countries. He has discovered and named more than 50 new shark species. (He named two in honor of his niece and nephew once they graduated college.) David Attenborough’s team has him on speed dial. He’s a regular on the Discovery Channel's Shark Week series "Alien Sharks", the BBC, and the National Geographic channel. He has authored 30 books and more than 500 publications, including Sharks of the World. He also hosts Beyond Jaws, an informative “all things shark-related” podcast.

Ebert has made a career out of researching overlooked shark species in the order Chondrichthyes, including ghost sharks (chimaeras) and rays.

“You have all these species that are being fished in many parts of the world,” he says. “One species hasn’t been seen since 1934 and was declared extinct upon it being formally named. Some countries don’t have the expertise or resources to identify new species. I never actually go to look for new species, I go to find what’s there.”

Along with his ongoing research, Ebert is the Director of the Pacific Shark Research Center, which is part of the Moss Landing Marine Laboratories at San Jose State University.

He recently served as President of the American Elasmobranch Society, and is currently  a scientific advisor for the Food and Agriculture Organization of the United Nations, and research associate at the California Academy of Sciences and South African Institute for Aquatic Biodiversity, among other titles. But he remembers that cup of coffee with Professor DeMartini, and the guidance and support he received as an event that changed the trajectory of his life.

“I made some of my best life-long friends there, they are still some of my closest friendships that have lasted for 40 years now,” he says. “I enjoyed my time there immensely, the friendships and the natural science courses where we had the opportunity to go into the field to look for plants, invertebrates, and other wildlife. Humboldt was my launching point for the rest of my career. I tell students who are interested in the natural world it’s a great place to start.”