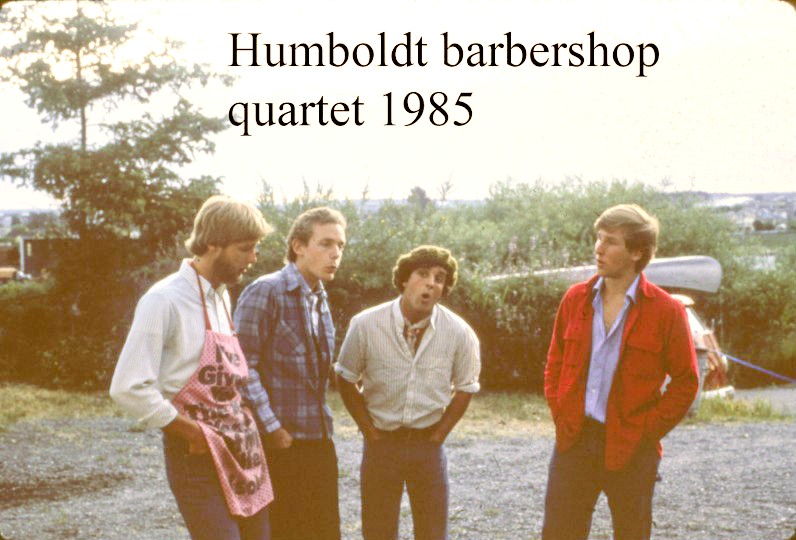 For nearly four decades, Paul Sheppard (‘82, Forestry) has kept in touch with his old college choir buddies from Humboldt State. Last year, separated by the pandemic, the alumni decided to relive their HSU days by getting together online to sing the University’s alma mater.

“Music was an incredibly important discovery for me at HSU,” says Sheppard, who is now a professor of Forestry at the University of Arizona’s Laboratory of Tree-Ring Research in Tucson. Still active in a variety of choral ensembles, Sheppard’s introduction to singing at HSU transformed into a lifelong passion, he explains.

Arriving at HSU without any formal music experience, Sheppard joined the student choir to fulfill his general education requirements. He remembers being encouraged by the late Emeritus Professor of Music, Carl Leland Barlow, who was known for recruiting non-music majors to Fulkerson Hall.

“Choir filled a niche in my life during college,” says Sheppard.

At HSU, he learned how to read music and even joined the student opera. But most memorably, Sheppard met Morris, Dresel, and Tomaszewski in choir and started their own barbershop quartet, The Old College Try. The group sang wherever people would listen.

“We met nearly every day on campus,” says Sheppard. “Rehearsals became our performance.”

As made clear by their name, The Old College Try had a healthy sense of humor and enjoyed entertaining challenges and song requests from the crowd. Over the years, the quartet performed at weddings and restaurants and, memorably for Sheppard, at the All-Western Forestry Conclave, held at HSU in 1982.

“We sang and told stupid cornball jokes and the crowd loved it,” says Sheppard, who remembers getting paid in supper.

The other barbershop quartet members have also kept singing: Dresel performs in musical operas in Napa and Morris, who still calls Humboldt County home, likes to polish his voice whenever he gets the opportunity.

The alma mater, originally written by Joyce Bruner (‘45, Music Education) in 1943, has been performed by the Marching Lumberjacks for decades. But the song was  “rediscovered” in 2018, when Bruner’s daughter, Sally Luotto, connected with the HSU Library’s Special Collections archives.

For years, the HSU alma mater had been sung without knowing the composer until Luotto solved the mystery–it was her mother. Bruner, who was in a campus madrigal group, entered a contest to compose the alma mater and won.

Knowing this history, Sheppard thought that 2020 was the perfect year for The Old College Try to sing it together. He reached out to Music Professor Gil Cline, who rescripted the alma mater and shared the music with Sheppard. With each alumnus singing his part separately, Sheppard did the technical blending to merge the trio’s voices in the final recording.

With Morris on melody lead, Dresel on high harmony, and Sheppard singing low harmony, the alumni’s rendition of HSU’s alma mater is a reminder that the University has faced, and overcome, unknown challenges before.

“It’s our way of fighting back against the pandemic,” says Sheppard.