Community College President Behind the Scenes of the ‘Greatest Stories’ 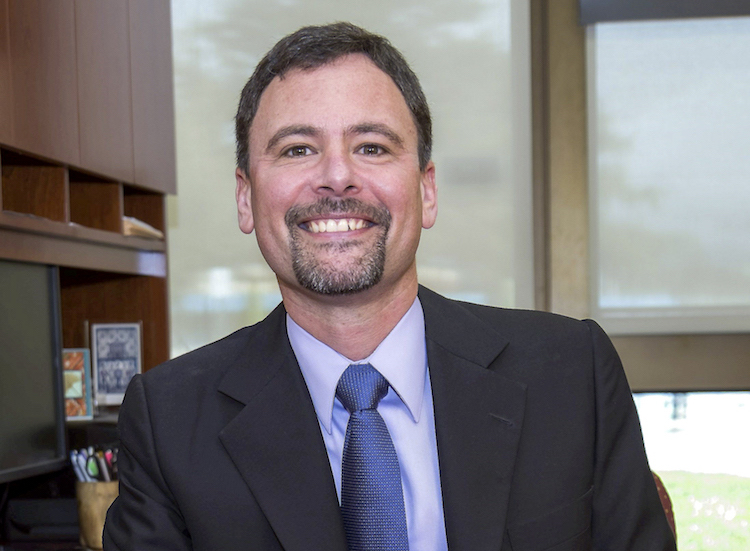 On a cool, overcast day, Tim Karas (‘91, Geography) walked across the field in Redwood Bowl to receive his diploma, becoming the first in his family to graduate from college.

“I clearly remember feeling that I was part of a greater community. It was a powerful sense of belonging and that I had finally made it,” recalls Karas. “I was so thankful to my family, the professors, and students who helped me reach that moment.”

He’s paying forward that sense of belonging as president of Mendocino College. The only  community college in their service area of Mendocino and Lake counties, the two-year institution continues to be a place of opportunity and possibilities for students and the region.

“Part of our mission is to be a gateway to higher education and help students find their home,” he says. “The story of the community college system is the students we serve: 50 percent are first generation college students, just as I was. That’s why I’m drawn to this college—I feel a sense of connection because I have lived part of their story.”

That story begins during his teen years. The son of Greek immigrants, Karas grew up in a working-class family who valued hard work and when it came to discussing his future, college didn’t seem to be in the cards for him. “I didn’t have good grades or take AP classes, so I didn’t think I was the kind of student that went to college. My family also saw college as something other people did,” he says.

But with his grandfather’s encouragement, Karas put himself on a path to a college degree. He attended West Valley College and found his place. “I began college not understanding the  bureaucracy, not knowing how to access tutoring or counseling services, or what good study skills and habits looked like. It was the college librarians and select professors who mentored me to succeed in the world of academia.”

When it was time to transfer to a four-year college, Humboldt was the natural choice. “Humboldt was perfect. It was a smaller, four-year institution that didn’t feel as overwhelming as larger schools. Humboldt had a strong Geography program, which was great because I liked maps, and I loved the area,” he says.

Humboldt didn’t disappoint. Karas learned how to analyze data through maps—a skill he still uses today. Applying his learning, however, was a highlight of his experience as an undergraduate.

“The whole campus and community is an outdoor lab. One of my fondest memories was using rope and measuring tape to conduct remote sensing and surveys in Arcata Community Forest behind campus.  I remember once seeing an owl, which helped me understand all these other connections to wildlife, ecology, and the land that you wouldn’t necessarily get at an urban campus.”

Humboldt ultimately changed the way Karas saw himself. “I never considered myself an exceptional student but after Humboldt I realized I was smart enough to be in college.”

With a newfound sense of confidence, he attended graduate school, eventually pursuing a successful career in academia. At Mission College he led Library Services and became Dean of Liberal Studies and Language Arts. In 2017 he was appointed vice president for the College of Alameda and  president of College of Alameda. Three years later he became president of Mendocino College, which he sees as an open door and a home where students learn to  believe in themselves.

“When I say ‘hi’ to a student, that brief connection makes me realize that I’m making their experience the best it can be, one in which they can see the goals they’ve set for themselves and their families,“ he says. “And the beauty of working in higher education is that we see the greatest stories—ones of students persevering, graduating, going off in life and being successful.”