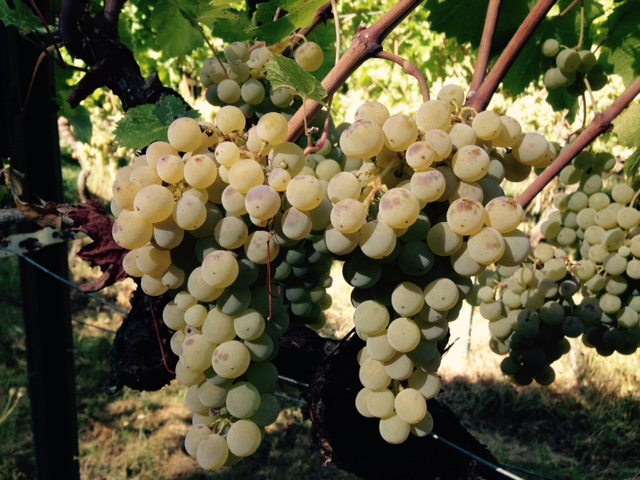 Grape vines are ideally suited to thrive among humans. Not only do they produce a fruiting body that humans have been enjoying for at least four millennia, they do it without occupying the most valuable arable land, leaving room for more profitable crops. In these marginal lands, the humble grape grows profusely, and – in an odd twist of nature – even prefers the challenging growing conditions, rewarding the farmer who sows his grapes in depleted soil with a more complex fruit.

This is ancient knowledge, and for the last few years, a Northern California winemaker has been using this European-style, old-world approach to craft fine wines in Humboldt County.

“It’s a serendipitous thing that humans and vines have lived together for so long. Vines don’t crowd out agricultural space and we love wine,” says Wil Franklin ('96, Botany, '99 Biology), the winemaker for Humboldt County’s Stargazer Barn winery, which is part of Arcata-based Sun Valley Group.

The winery, located near Willow Creek, Calif., takes advantage of the area’s climate of moderate-to-hot days and cool nights. It produces small-batch, handcrafted wines from Humboldt County grapes, and also sells collections featuring flowers and other local artisanal products that can be delivered across the country. The winery crafts several varieties in the European tradition, including chardonnay, cabernet sauvignon, pinot noir, and others.

Franklin explains that the winery’s offerings are different from much of what’s made by major producers. “We’re the small boutique winemaker that's trying to preserve old ways. It's akin to preserving an old language or an old instrument. It's preserving an old craft that’s entirely different and historical.”

To hear Franklin describe the methods that many modern wineries use is like hearing something from a science fiction novel. Grapes are tweaked at the molecular level to make wines that taste OK to most consumers, but which enthusiasts say lack character.

In essence, many major wineries can remove elements they don’t want and add back in things that are missing, but, according to Franklin, what you get pales in comparison to what wine could be. “It’s more like Velveeta than cheddar. Sure it’s a product made with milk, but you wouldn’t call it cheese.”

Multiple factors are giving Humboldt producers a chance to share unique wines as tastes trend away from mass-produced varieties. First, the high-tech treatment of grapes is a capital-intensive project that most producers simply can’t afford.

Second, this method doesn’t mesh with the hand-crafted appeal that so many Humboldt County specialty producers are after. More meddling doesn’t always produce a better product. “I try to go as natural and hands-off as possible. And you get bright, crisp wines that go well with food. It’s really fortuitous for me; I get to make great wines out of grapes that naturally have a penchant for European-style wine making.”

The Stargazer Barn winery is a big supporter of Humboldt State, with donations from sales of special HSU-themed wines.

Before Franklin partnered with Stargazer Barns Winery, he was a winemaker at a large winery in San Luis Obispo County producing a half million crates of wine a year. He credits the depth and breadth of his education at HSU for preparing him to take on such a major role without having taken the traditional path through winemaking school. "It really was a lot of luck plus having a great education. HSU really prepares you," he says.

Soon after, Franklin was able to use his science skills to lecture in biology, botany, and ecology at Pennsylvania’s Bryn Mawr College. Today, Franklin uses his teaching skills in sections of HSU’s Wine Certificate program, offered through Extended Ed and geared toward aspiring winemakers, farmers, restaurateurs, and anyone curious about wines.