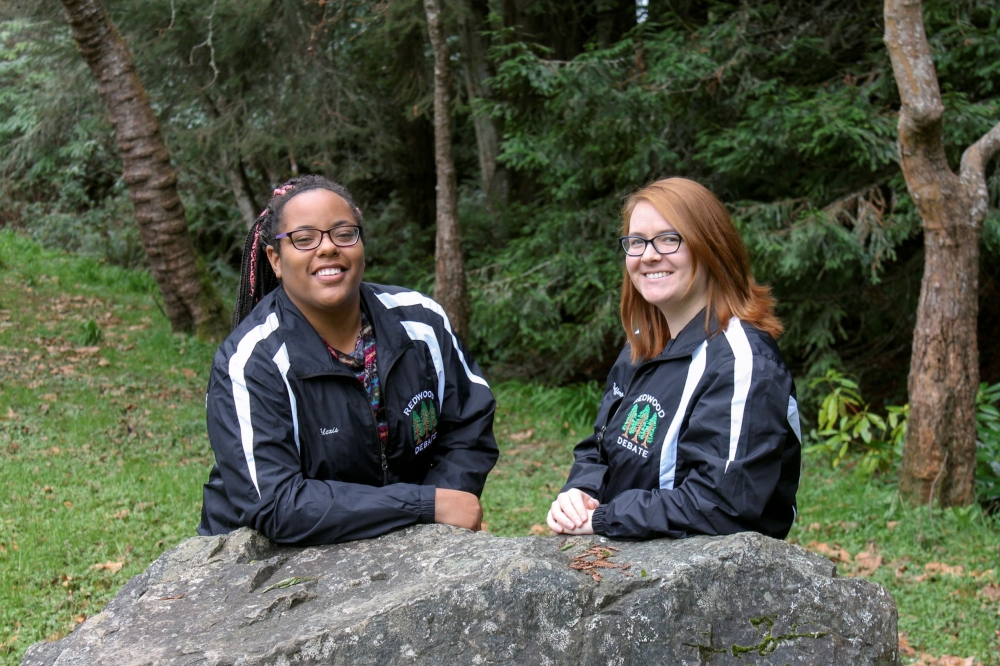 Debate partnerships are special relationships that require mutual respect and resilience. During their time at Humboldt State University, alumnae Allison Rafferty (‘19, Biology) and Alexis Brown (‘19, Political Science) were a legendary duo on the University’s debate team. Today, both women have leveraged their experience in argumentation and teamwork into their careers as educators.

Competing as a pair for more than two years, Rafferty and Brown attended numerous tournaments together in Oregon, Washington, and California. HSU debate coach Aaron Donaldson says that a match like Rafferty and Brown is incredibly rare. “Competitive debating is a challenging and vulnerable space that partnerships must withstand and rise above,” explains Donaldson.

At HSU, Rafferty joined the debate team with preparation for her future career as a teacher specifically in mind. Getting more than she bargained for, Rafferty says that the team quickly became her campus family.

“The HSU debate team was an amazing experience and one of the most diverse spaces on campus, which I really valued,” remembers Rafferty.

After graduation, Raffery completed a dual teaching credential and master’s degree at the University of California, Berkeley. Last fall, she started as a seventh grade science teacher in Beaumont, California, where she herself was a former student.

“It’s an interesting time to become a teacher,” says Rafferty, who considers teaching a political act. When navigating difficult conversations among students, she finds herself drawing on her debate skills to model respectful and informed discourse. She believes that it’s a missed learning opportunity for teachers to avoid contentious topics like climate change and Black Lives Matter in the classroom.

The intersection of science and politics is a familiar one for Rafferty and Brown. The pair drew on their respective disciplines to research and prepare for debate topics, and to complement one another in competition.

“Allison would address climate impacts and I would talk about structural changes and policy,” explains Brown. “We both brought research to the table that made the debate richer.” Over their many competitions, the pair faced down topics like affirmative action, reproductive rights, Brexit, Facebook, and politics in the Middle-East and North Korea.

Since her time at HSU’s Political Science department, Brown has worked as a union organizer in Humboldt County. Last fall, she started a two-year Teacher Resident position at the Arbor Center Teaching in Portland.

“On the debate team, we learned to analyze topics with a social justice lens, which is essential in education,” says Brown. “I’m excited to share that perspective with my future students.”

Both Rafferty and Brown have fond memories of HSU: hiking with friends on the weekends and researching debate topics together at Humboldt Slice of Pie. More than anything, the young teachers value the lessons instilled by Donaldson and the HSU debate team—never stop learning and always come prepared.