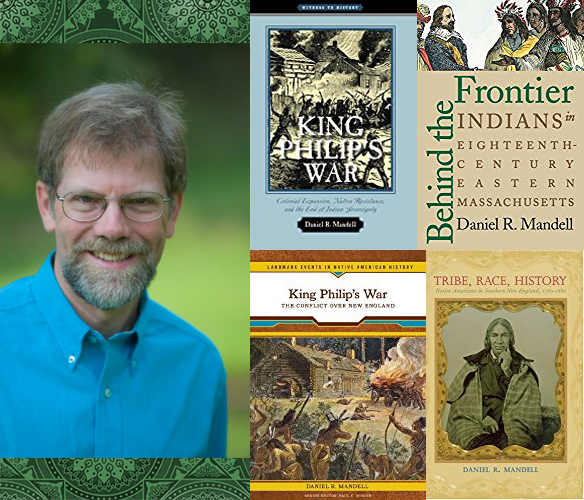 Over a 25 year career, Daniel Mandell ('79, History) has produced a body of work that tells the story of New England Native Americans from the time of first European contact through the formation of the United States and its expansion. In 2016, the Missouri Humanities Council recognized Mandell for distinguished literary achievement.

As a prolific writer, Mandell has written and edited a half dozen books and a dozen articles on Native American history. Perhaps his best-known work, King Philip's War: Colonial Expansion, Native Resistance, and the End of Indian Sovereignty (2010), chronicles the ruinous conflict between Europeans and Native Americans in the 1600s. He’s currently a professor of history at Truman State University, where he’s taught since 1999.

During his time at Humboldt State, Mandell led the formation of the Jewish Student Union and was active in political and social issues surrounding Native American rights. He recalls attending a brush dance with Professor Norton and participating in a sit-in in the president's office in 1977.

Mandell was also a student assistant to history professors Claude Albright and Rodney M. Sievers. He developed a keen interest in art photography that grew from an earlier desire to work as a photojournalist.

His history education would take him to the University of Virginia where he worked on a master’s degree and started on the Ph.D. However, circumstances led to a brief career change. A volunteer with the Sierra Club, Mandell developed expertise in environmental issues and policy. This led him to earn a master's degree in Urban and Environmental Planning from Tufts University in 1989. But the lure of history remained, and he finished the Ph.D at Virginia in 1992.

Mandell’s current project is titled The Lost Tradition of Economic Equality in America, 1600-1880. The book focuses on issues of class and concerns with economic equality, which Mandell says emerged in England in the 17th century and spread to America. It became an important issue in American politics during the Revolution and the early Republic.

Having first grown curious about the economic and class experiences of Native Americans in those periods, Mandell became interested in the broader topic as, just before the Great Recession, articles in the New York Times and elsewhere tried to make sense of the growing gap between rich and poor. “All of these articles, if they went into any historical background at all, began with the 1880s and 1890s during the Gilded Age and the progressive periods. I knew from my own research that these issues went way back in our history. So I thought, someone needs to tell this story.”

The book is slated to be published by Johns Hopkins University Press in 2018.

Mandell’s other major works include Tribe, Race, History: Native Americans in Southern New England, 1780-1880 (2008), which won the Lawrence W. Levine Award for the best book in American cultural history from the Organization of American Historians, and Behind the Frontier: Indians in Eighteenth-Century Eastern Massachusetts (1996).

You can learn more about Professor Mandell’s work at his website: http://dmandell.sites.truman.edu/.