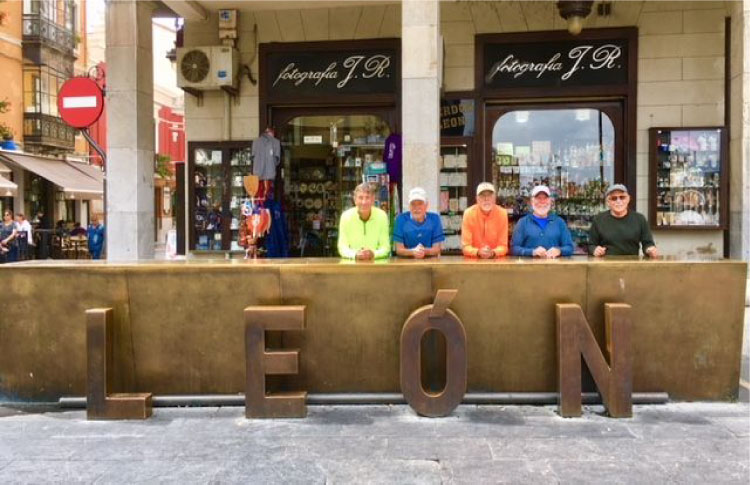 The alarm sounded at 6 a.m. on September 4. We awoke to dark skies in Leon, Spain. This was going to be the first day of our 200-mile trek following the historic Camino de Santiago, a medieval pilgrimage trail that extends from the French border all the way to Santiago de Compostela, Spain.

Mark Byers (‘74, Business Administration), Howard Labrie (‘72, History), Fred Leoni (’71, Physical Education), Don Makela (’73, Geography), and Vince Engel (’70, Art) headed out the hotel door. Burdened with backpacks, we were on the lookout for the first yellow painted arrow. These arrows would be our  guides for the next 13 days.

The idea for this adventure started with Vince a year prior. He had completed his first Camino walk in June of 2017 with his wife Isabel (’70). It was a journey of over 500 miles, starting in St. Jean du Pied du Port, France. Once he finished his journey, he thought, why not do it again with friends? This could be just the reason to get the self-designated “Humboldt State Old Boys” together again.

The Old Boys first met 50 years ago at a preseason HSU cross country camp held annually at the old Elk River logging camp south of Eureka. We became teammates and friends, running for coach Jim Hunt on the Humboldt track and cross country teams in the late 60’s and early 70’s.

Since then, we’ve scattered to various continents, but most of us have continued to visit Arcata when possible. Some went to Australia, a couple moved to Europe, others returned home to the San Francisco Bay Area, Southern California, or other locations in the state, while a few of the lucky ones stayed in Humboldt County. We’ve slowed down since graduation, but we still like a challenge and a reason to reunite. So after months of emailing and discussion, a group of us met up in Spain and started walking into the early morning light of Leon. Another Humboldt alumni and running mate, Gary Tuttle (‘69, Physical Education) would be riding a mountain bike instead of walking, accompanied by his wife and sister.

The first few days were easy enough. We had a few blisters, along with the usual aching knees, but each morning we were ready to head out for another 15-mile hike over mountains, through small towns, remote villages, and vineyards. Along the way we stayed in the local albergues and hostels, sharing rooms and meals with fellow pilgrims from around the world.

We quickly became known as “El Cinco Americanos de Humboldt.” Our story of 50 years of friendship got around. It seemed everywhere we stopped people asked if we were the five Americans. Funny how our story of friendship played so well on the trail. This was helped considerably by Fred, who became the instant mayor of every place we stopped, engaging with anyone who would listen, exchanging stories and learning new words in their native languages. Amazingly, along the way, we encountered other Humboldt alumni. Each time we shared drinks and stories, agreeing how lucky we all were to have gone to school in Arcata.

After 13 days of walking, we arrived at Praza do Obradoiro in front of the cathedral in Santiago de Compostela. Ernest Hemingway described this cathedral, a Unesco world heritage site, as the building that meant the most to him in the world. To us, it was the finish. Blisters, sore knees, and dirty clothes be damned--e had made it. After picking up our Compostela, the diploma one receives for completing the journey, we laid down on our packs to rest in the afternoon sun of the Plaza.

The next day Gary his wife, Ruth, and sister Toni arrived. They had completed their Camino for charity, raising more than$7,000 for a children’s hospital in England.

That evening, 50 years after meeting each other at Humboldt, we sat around a restaurant table and traded stories. Some stories were new, others were  old Humboldt stories -- the same ones we had been telling since graduation. Someone once said, “The older we get the faster we ran as boys.” In our case, this was definitely true. We laughed and toasted our friends from the Humboldt State Old Boys, Coach Hunt, and the University more than a few times.

Our bodies had survived, we were still talking to each other, and plans for our next reunion trek were beginning to emerge. The Tour du Mont Blanc, anyone?