On the Front Lines of COVID: An Infectious Disease Expert Innovates to Save Lives 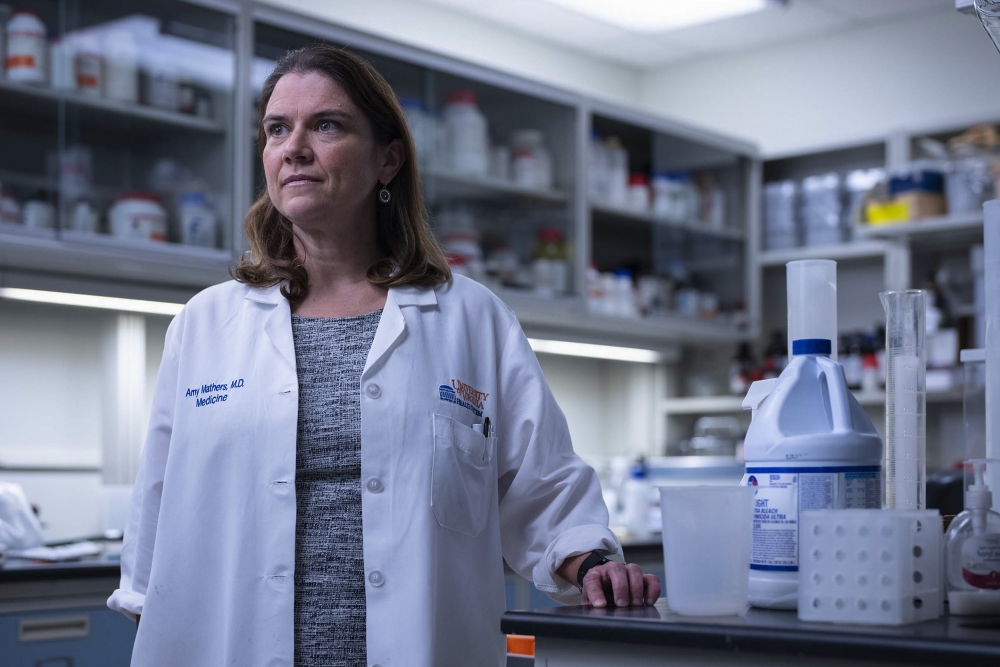 An infectious disease physician with a background in wastewater and epidemiology, Dr. Amy Mathers (‘97, Biology) found herself among the country’s top medical officials as they scrambled for answers in the early days of the pandemic.

With COVID-19 cases mounting across the country, accurate and timely tests for the virus were scarce. Recalling her years of training in molecular biology at Humboldt State, Mathers threw herself into developing a testing protocol at the University of Virginia (UVA) Medical Center, where she is the lab’s associate director.

“It was like nothing I had ever been through before,” recalls Mathers, who was taking care of patients and working around the clock to develop testing protocols in her lab.

After navigating a gauntlet of supply chain problems, exacerbated by competing guidance from the federal government, Mathers and her colleagues at UVA became the first laboratory in the state to administer tests for SARS-CoV-2 in March 2020.

Since then, Mathers hasn’t let up on the gas: She collaborated with UVA engineers to manufacture testing swabs, she developed a batch testing protocol using wastewater samples from campus dorms, and most recently, Mathers dedicated her lab to whole-genome sequencing to understand COVID-19 transmission and inform public policy. For her ongoing effort and human impact throughout the pandemic, she was named UVA’s Edlich-Henderson Innovator of the Year this November.

“Over the past 20 months, the collective sense of urgency from doctors and medical researchers has saved thousands of lives,” says Mathers.

Mather’s father is also a doctor, but her own path to medicine wasn’t a straight one. Drawn to Humboldt State University’s Oceanography program, Mathers quickly found that boats made her claustrophobic. After landing in a class with Jacob Varkey, HSU Emeritus Professor of Biology, Mathers got excited about genetics—along with chemistry, math, history, and even wildlife.

“I loved everything about HSU,” says Mathers, who remembers trips to the beach and hiking with college buddies who she still calls friends today. After more than five years in Arcata, Mathers graduated in 1997 with 189 credits on her transcript. “I would have stayed at HSU forever.”

Next, Mathers headed to Loyola Stritch School of Medicine in Chicago. Finding herself scientifically and academically well-prepared to become a doctor, Mathers went onto a residency in internal medicine at Maine Medical Center.

“In Maine, I returned to my first love of genetics and started doing research on the bacteria that causes Lyme disease,” says Mathers. In the field, Mathers studied birds and mice on tiny rock islands off the Maine coast, using wildlife and bacteriology techniques she learned at HSU. “My education at Humboldt was so hands-on, it keeps returning in my career.”

Mathers landed in Virginia in 2006 for an infectious disease fellowship, and started focusing on how Gram-negative bacteria, such as E. coli, were being transmitted in hospitals. “I was using molecular bacteriology techniques that I learned in the lab with Biology professors Michael Bowes and Jacob Varkey at HSU.”

The research led Mathers to a sabbatical at Oxford University in 2014, where she learned whole genome sequencing techniques which helped to determine a significant link between wastewater and disease spread. “A poorly designed sink or toilet can be a source of resistant E. coli in a hospital,” she explains.

In addition to helping run UVA’s cutting-edge Medical Lab, Mathers also oversees her Sink Lab, which works to understand and prevent the spread of drug-resistant bacteria. In 2020, CNN’s chief medical correspondent Dr. Sanjay Gupta, interviewed Mathers about her wastewater surveillance program, and she presented her research in bacterial genetics to the World Health Organization in 2021.

“I’m in a unique position to be effective,” explains Mathers, whose work is now focused on how to prevent drug resistance, a top priority for global public health.

Photo: Dr. Amy Mathers in the medical lab at the University of Virginia. Image by Sanjay Suchak