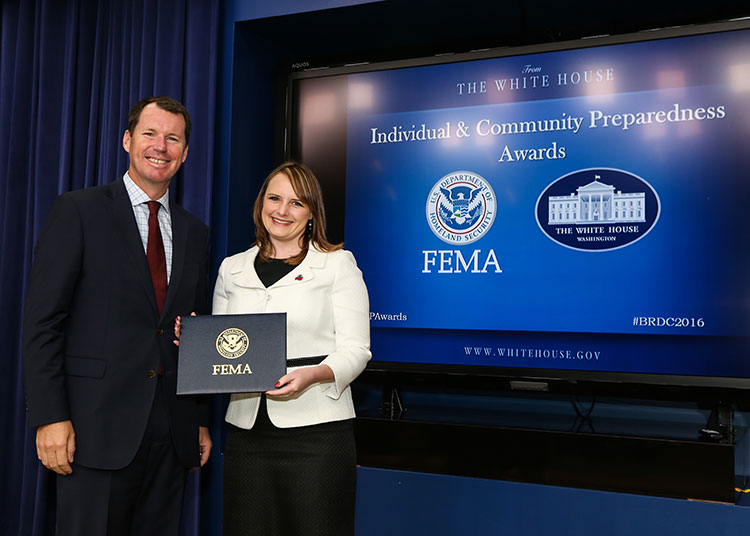 A zombie invasion and natural disasters, it turns out, have more in common than meets the eye. And one HSU alumna is using that connection to raise awareness of potential catastrophes in Southern California.

Jenny Novak (’07, Geography) is the Emergency Management Coordinator at California State University Northridge. Novak recently visited the White House to receive an award for community preparedness programs from the Federal Emergency Management Agency in Washington, D.C. Novak caught the attention of FEMA with a program she developed drawing on inspiration from the Centers for Disease Control’s zombie role-playing scenario.

In 2011, the CDC ran an experimental zombie attack response and captured the imagination of the media and public. According to the CDC, what started as a tongue-in-cheek campaign to engage the public with emergency preparedness proved to be a very effective format that could be repeated elsewhere.

Novak added a new twist to the CDC's approach by introducing a scavenger hunt to the simulated preparation for a zombie invasion. The combination provided a unique and engaging way for the campus community to start thinking about disaster preparedness. “I loved the idea of taking something from pop culture and making it applicable to something that’s really important,” says Novak.

The scavenger hunt sent participants to eight locations around the CSUN campus, where students picked up items for their starter emergency kits; things like flashlights, emergency blankets, and multi-purpose tools. The hunt had the added benefit of boosting community ties by getting students to explore resources and meet people on campus.

Disaster experts know that communities recover from disasters when people share close ties and are involved and engaged with their communities before a disaster. “If people are more isolated and don’t have those relationships, they don’t know where to go for resources or even just emotional support after a disaster, and they’re not going to bounce back as quickly,” says Novak. She adds that more than three-quarters of the scavenger hunt participants visited a spot on campus they had never been before.

Novak, who also holds a master’s degree in Geography from the University of Southern California, traces her first exposure to natural disaster management to an assignment in a senior Geography course at HSU. Her project surveyed local emergency preparedness efforts by looking at both household preparedness and official programs set up through local, state, and federal governments.

Like many juniors and seniors, Novak says she had difficulty seeing the connection between her studies and the workforce. By interviewing local preparedness managers, she began to see a career take shape. Novak credits the mentorship she received to HSU Geology Professor Lori Dengler, National Weather Service Meteorologist Troy Nicolini, and others.

“If it weren’t for me having that experience, I don’t think the zombie scavenger hunt and the FEMA award would have come to fruition. It was through doing that project that I really started to see that this could be a career path for me.”