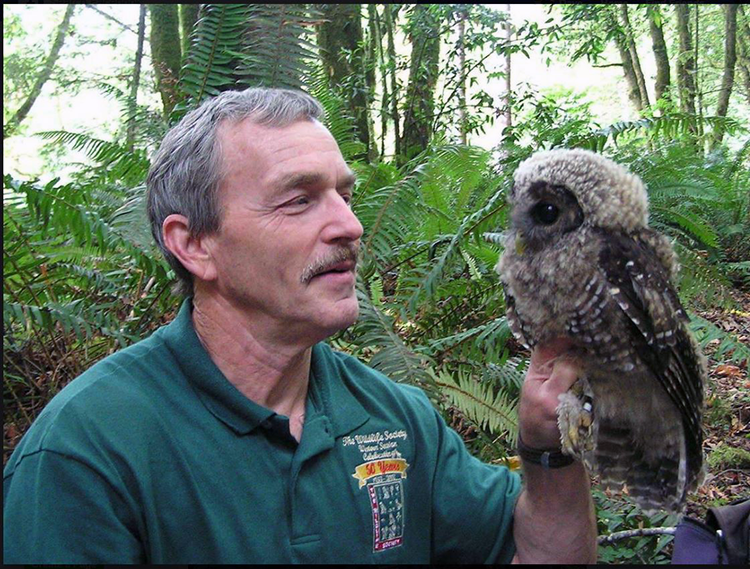 June 29, 2017—As a former Green Diamond Resource Company wildlife biologist and Humboldt State professor, Lowell Diller made important contributions to forest and wildlife management in Northern California during his lifetime.

After Lowell passed away in March, his brother Dave set out to honor him with an HSU scholarship that would capture his spirit and passion in the next generation of wildlife biologists.

As a credit to Lowell’s reputation as a scientist and colleague, Green Diamond joined the Diller family’s efforts by making a $50,000 gift to the Lowell Diller Wildlife Scholarship Endowment—a contribution large enough to permanently endow the fund, making it available for future generations of HSU scholars. Endowments work by investing a donor’s contribution long-term, using only the income generated each year to award a scholarship in perpetuity.

“This scholarship is a fitting tribute to Lowell,” says friend and colleague Neal Ewald, of Green Diamond, a Washington-based forest products company. “Green Diamond’s gift is a way to honor a remarkable man and encourage others who share his passion.”

Notably, Lowell and his staff developed the first Habitat Conservation Plan for the northern spotted owl on behalf of Green Diamond after discovering they were living in a wider variety of habitat than was previously understood. The well-developed plan protected elements of the forest that were vital to the threatened owl and earned Lowell the respect of both fellow biologists and colleagues in the timber industry.

Whether training biologists at Green Diamond or mentoring students at Humboldt State (where he began instructing in 2001), Lowell was regarded as a naturally gifted teacher. “He went out of his way to give students great experiences,” says Micaela Szykman Gunther, chairwoman of the wildlife department at HSU. “He was such a good spirit. The students really adored Lowell. He was a character. He was a storyteller. He was a larger-than-life personality.”

Lowell inspired countless HSU students, including Leia Ames, who wrote: “Some of my fondest memories at Humboldt were while on an adventure in Lowell’s class. I am truly inspired by his passion for animals and life.”

If you, too, were inspired by Lowell, join in honoring him by supporting the Lowell Diller Wildlife Scholarship Endowment. To learn about other ways to support HSU students, visit loyalty.humboldt.edu, email the Office of Philanthropy at giving@humboldt.edu, or call 707-826-5200.