Helping bring the private sector into the business of space travel, Bruce Jackson’s work as Vice President of Trade Controls and Export Strategy is critical to the future of Virgin Galactic, the world’s first space tourism company.

Jackson’s primary responsibility is to work in unison with federal agencies to protect the use of sensitive technology developed in the private sector while still encouraging development and innovation. Known as an expert in international trade, Jackson previously served as Vice President of JP Morgan’s Trade Management Consulting Group.

According to Jackson, his experiences at Humboldt State set his intended path in motion. “I knew going into college that I wanted to pursue a career with an international focus, and the opportunity to study abroad during my third year, and my time involved with Model UN while at Humboldt helped me prepare for that future,” Jackson said.

Jackson has more than 29 years in the export compliance field, having worked both in the government and private sectors. He was also recently appointed by the U.S. Secretary of Commerce to the department’s Regulations and Procedures Technical Advisory Committee (RPTAC) and is also the current chair of the Export Controls Subcommittee of the Commercial Spaceflight Federation (CSF).

Prior to joining Virgin Galactic, Jackson was the Exports Practice Leader for J.P. Morgan’s Trade Management Consulting group in North America. J.P. Morgan acquired the software and consulting start-up Vastera Inc in 2005 where Jackson was also the Exports Practice Leader of the Trade Management Consulting Group. His clients included companies cutting across a wide range of industries, from Silicon Valley startups and “mom and pop” manufacturers of specialized industrial and aerospace components, to global 100 corporations.

Earlier in his career, Jackson worked for ABB Asea Brown Boveri, the Swiss-Swedish electrical engineering giant. He was based in Mannheim, Germany, for 10 years, arriving three weeks after the Berlin Wall came down. He also worked as a consultant in the international trade practice group of a major Wall Street law firm. He began his career at the U.S. Department of Commerce Bureau of Export Administration.

Jackson graduated from HSU in 1984, earning a bachelor’s in Political Science. He has also studied at the Institute for East European Studies and the University of Uppsala, Sweden. Jackson resides in Las Cruces, N.M., with his wife and three children. 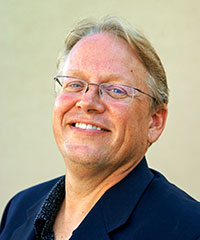