Neubacher earned his master’s degree in Resource Management from HSU in 1983, and has gone on to a highly successful, three-decade career with the National Park Service. He now holds one of most prestigious positions in the parks, serving as Superintendent of Yosemite National Park, a designated World Heritage site that attracts more than 4 million visitors each year.

Neubacher’s first position with the National Parks was at Glacier Bay National Park in Alaska. Other roles have included serving as Deputy General Manager and Planning Director for the Presidio of San Francisco transition project from 1992 to 1995.

He was appointed Superintendent at Yosemite in 2010. In that role, he provides oversight of 1,100 employees and an $80 million budget. Among other work there, he has led development of a new management plan for hikers at Half Dome, helped finalize a long-studied plan for the Yosemite Valley, and managed multiple fire threats. 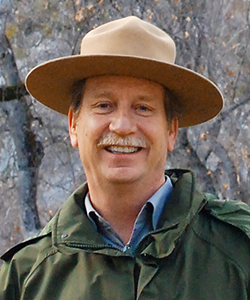