After volunteering for the Peace Corps in Nepal, Greg Beck continued his education in the International Development track of the Environmental Resources Engineering graduate program.

Currently, Beck is FHI 360’s Director of Integrated Development where he leads a corporate initiative to generate evidence and foster global learning on integrated development solutions.

Before joining FHI 360, Beck served in the Obama Administration as Deputy Assistant Administrator in the Asia Bureau for the U.S. Agency for International Development (USAID), where he managed more than $2 billion in funding for development programming and policy in East Asia and the Pacific. Additionally, Beck presided over the reopening of the Burma (Myanmar) mission after a 24-year closure and chaired the U.S. government’s interagency committee that planned and launched President Barack Obama’s Partnership for Growth in the Philippines.

Beck also brings many years of field and senior leadership experience from the International Rescue Committee, Community Housing Foundation, USAID’s Office of Transitional Initiatives and the Peace Corps that he speaks to in his recent TEDx talk. He has worked in Africa, the Caucasus, Asia and the Balkans and led large emergency responses around the globe.

Beck has a bachelor’s degree in Foreign Service and International Politics from Penn State University. 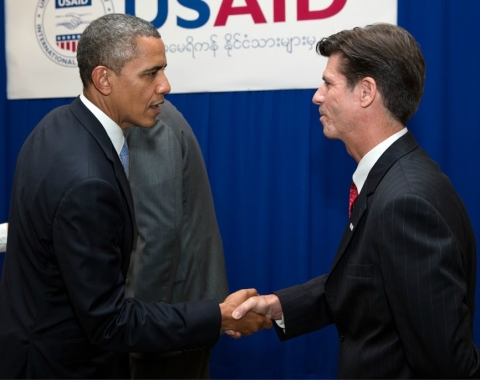