Gaining prominence in her field in a very short time, Kaitlin Yarnall has worked as Deputy Creative Director for National Geographic magazine since 2011. Her role includes managing a staff of 25 editors, production designers and specialists, and researchers for one of the world’s most prestigious publications.

A summer internship with the magazine following her senior year at HSU opened the door for Yarnall’s career at National Geographic, which has included stints as Senior Research Editor for maps and Deputy Art Director. Yarnall has earned multiple awards, among them honors from the Society of News Design, the American Society of Magazine Editors and Society of Publications Design. She is a frequently sought after speaker on topics of cartographic and infographics design.
In her current role, one of Yarnall’s most prominent projects is serving as editorial lead and National Geographic project manager for the 2014 series, “The Future of Food,” produced in partnership with the United Nations.

In 2012, Yarnall was part of a team that profiled HSUForestry Professor Steve Sillett’s research on the world’s tallest trees. For a recent issue on the Titanic, she worked with film director James Cameron and engineers from the U.S. Navy to create an interactive map of the ship’s remains. Also in 2012, she combed through world population data to create a profile of the world’s most typical person.
Kaitlin earned Bachelor of Arts degrees in Geography and Spanish at Humboldt State, graduating summa cum laude in 2005. She continued her education at the George Washington University in Washington, D.C., earning a Master of Arts in Geography in 2008.

While at HSU, Yarnall studied abroad in Quito, Equador while pursuing her Spanish degree. “This time and program, which included working in a hospital, prepared me to travel and operate within the developing world,” Yarnall said. “This prepared me for field research in graduate school and also for much of the travel I’ve had to do with National Geographic.” 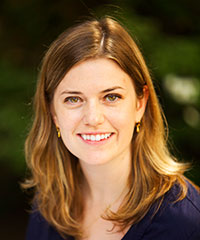