Rick Rosenthal (‘67, Zoology) is a multiple Emmy and BAFTA award winning cinematographer who specializes in natural history. Growing up in southern California, Rick learned to free dive at an early age. His first professional opportunity came when he was hired by Sea World to assist with the care and training of whales. While completing his undergraduate degree at HSU, he also served as the first dive instructor. Rosenthal later received an M.S. in marine biology from San Diego State University. After graduating from HSU, he was hired onto the scientific staffs at Westinghouse Ocean Research Laboratory in San Diego, and Scripps Institute of Oceanography. Some years later he relocated to Alaska, and worked as a consultant to the Alaska Department of Fish and Game, the Office of the Governor, the National Marine Fisheries Service and the U.S. Fish and Wildlife Service. As a scientist, he has written more than 40 research papers and popular articles on marine biology, ecology and animal behavior. Underwater camera work played a key part in his early research. Compelled to share his observations with a larger audience, he began working in television and filmmaking. In 1984, Rosenthal began a long association with the prestigious BBC/Natural History Unit in Bristol, England. This was a launching pad for many worldwide assignments that included being a principal cameraman for BBC’s landmark Blue Planet series, a nature documentary series described as the “first ever comprehensive series on the natural history of the world’s oceans.” Following this work he received commissions for three major films on the great whales, and key camera work for the BBC/Discovery blockbusters Planet Earth and Life. His latest Emmy (2011) was for the National Geographic television series Great Migrations. Rosenthal’s most recent film work is an integral part of two television specials: Superfish and Hot Tuna. Both films are currently being broadcast worldwide, and have been screened at HSU. His latest film project entitled The Dark Side of the Ocean is scheduled for production this year, and will most certainly push the boundaries of open ocean exploration and discovery. 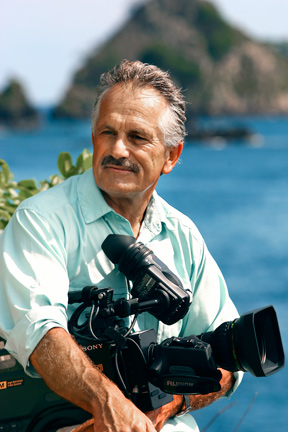